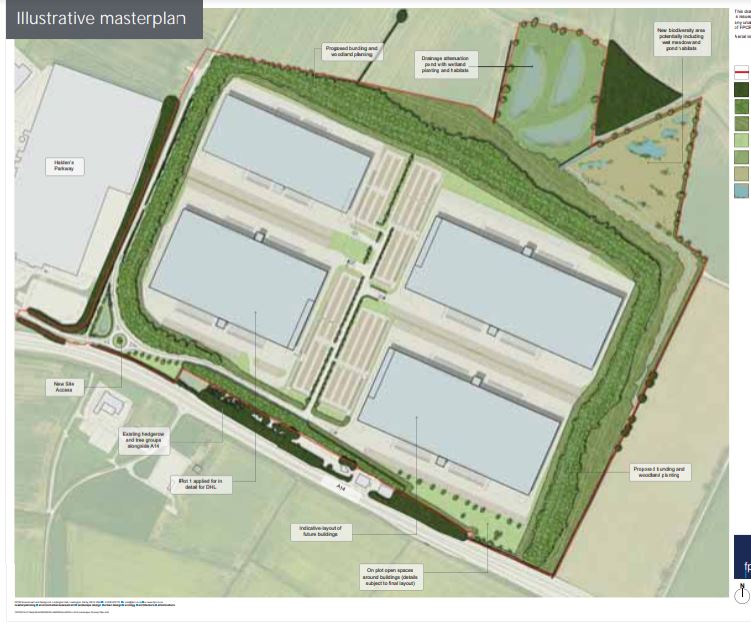 About 150 people, from Titchmarsh and beyond, came to an exhibition at St Mary’s Church last Thursday, November 18th, held by Newlands Developments, who propose to build up to 200,000 sq metres of warehouses on the 175-acre Castle Manor Farm site, a mile south of Titchmarsh on the north side of the A14.

If planning permission is granted, Newlands will build four warehouses on the site, which would be known as Equites Park (after Equites, a South African property fund that Newlands are in partnership with). The first warehouse, 55,000 sq m in size, is earmarked for use by DHL and would be in the south-west corner of the site, by the corner of Huntingdon Road and Ranway (called Islington on their plans), where a new roundabout would be built. Three more warehouses – whose occupants are not yet known – would probably be built later to the north and west, along with parking for a total of 1,600 cars and 600 lorries.

All the warehouses would be up to 24.5 metres (80 feet) high, though Newlands say that land on the western part of the site would be excavated to create a flat “plateau” so the new warehouses would appear no higher than the existing Primark warehouse over the road. They also promise that 36% of the site, around its northern, western and eastern sides, would be “green infrastructure” to reduce their visual impact.

Newlands is promising to make some improvements to junction 13 of the A14, with new traffic lights by the slip road for traffic leaving the A14 eastbound, and to put an extra northbound lane on the A605 from the A14 to the Huntingdon Road roundabout. But it is not clear how other roads can cope with the huge increase in lorries that four huge new warehouses would bring. Newlands are only making vague promises of “additional traffic calming” on Ranway to stop these lorries going through Titchmarsh on their way to and from the site.

Newlands – until recently known as Roxhill – are a development company based in Rugby, who have already developed Warth Park, the huge logistics park on the western edge of Raunds. They are saying they plan to submit a planning application before Christmas, to be decided in the spring or summer of next year, though they have backed away from an earlier vow to start building work on site by the end of 2022.

STAUNCH (Save Titchmarsh and Upper Nene Countryside and Habitats) is the campaign that the parish council has set up to oppose both the Castle Manor Farm development, and a separate business park development, only slightly smaller, on the adjacent Glebe Land site, between the A605 and Ranway.

Titchmarsh Parish Council and STAUNCH believe that the countryside between Thrapston and Titchmarsh is simply the wrong place for a huge new logistics park, and that new warehouses should be built on existing industrial estates and brownfield sites, not on farmland.

STAUNCH has been deluged with messages from residents of Titchmarsh, Thrapston and other nearby villages who are concerned about the impact these development will have on traffic, noise, rural views, flooding and biodiversity. As the map above/below shows, if both sites are developed the existing Halden Parkway industrial estate would quadruple in size.

The developers claim that there is “no supply of available or allocated land in this part of the A14 corridor” and they have evidence of a “supply-demand gap”, but all along the A14 are new warehouses, many of them not yet occupied. As for employment, the promise of 4,700 jobs across the two sites rings hollow, given that warehouse technology is increasingly going robotic. And given that Thrapston is a small town with a limited labour pool, most people working there will have to travel long distances, only generating more traffic.

IM Properties have just announced their own “Community drop-in” event from 10am to 4pm on Saturday 27 November at The Clubroom on Titchmarsh High Street (another is being held on Friday 10 December from 12 noon to 8pm at the Plaza Community Centre in Thrapston). They promise that they will consult again on more detailed plans in early 2022.

As at the exhibition last week, STAUNCH recommends that residents go along, look at the plans and ask questions, but hold fire on any feedback for now. The real battle is yet to come when these two huge developments go to North Northamptonshire Council for planning permission, probably sometime in 2022.

Please come to STAUNCH’s public meeting, at the Clubroom at 7.30pm on Tuesday 7 December, to find out more about how we can work together to stop these destructive plans. Remember: these developments CAN be stopped, provided we work hard, stay organised and lobby our local politicians effectively.

Titchmarsh residents have their say

“These developers who want to build warehouses on the fields near Titchmarsh seem very ill-informed about the needs of the area, and the local infrastructure. Our roads simply won’t cope with all the extra traffic” – Geoff Love, High Street

“Newlands say they will create 2,400 new jobs, but there is no local Labour pool to fill them. People will have to commute by car or minibus from towns like Peterbough, Wellingborough or Kettering, only adding to the carbon footprint of these developments.” – Charlie Wilcox, High Street

“The developers have not thought properly about road access. And given that Britain has just hosted the COP26 climate change conference, we should be saving our countryside and improving its biodiversity, not building warehouses on it” – Kate Eve, Bidwell Cottages

Dates for your Diary

What can I do to help stop these plans?

www.staunchcampaign.org –the website of STAUNCH, with more information about both sites, and how you can help the campaign to stop these developments